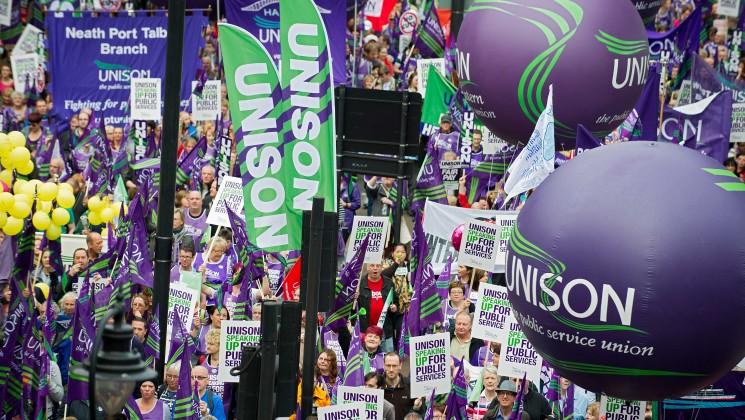 Hundreds of delegates representing over 1.3 million workers attended Unison’s national conference in Brighton between 19th-22nd June to report on the situation facing workers across the UK and discuss how our union can meet the challenges ahead. Hampshire Unison Branch sent four delegates this year; our new Branch Secretary Emma Howden, Deputy Branch Secretary Mary Pearson; and branch stewards Carla Young and Callum Williamson.

Workers and services under attack

The speeches given by delegates across the country could leave a listener in no doubt as to the scale of the attack which is underway on our public services and the working conditions of those who provide them.

Delegates representing workers in social care painted a picture of underfunding, private providers who act with disregard to workers right and dedicated workers struggling to provide what care they could against the odds. Conference called for the union to continue its campaign to ensure employers comply with minimum wage legislation and overwhelmingly backed bringing social care back in-house to be delivered directly by the public sector.

Perhaps the most powerful speeches came from council workers from the Kensington and Chelsea who have been working with and caring for survivors of the Grenfell Tower fire. Unison members spoke of attempts to scapegoat them by some in the media and elements who wished to deflect responsibility from politicians and private companies. The truth is that our members threw themselves into the task of helping the survivors, facing threats and harrowing work which left some with PTSD. Conference embraced our sisters and brothers who dealt with the aftermath of the fire and reiterated its call for justice for the survivors, for the provision of decent council housing, and an end to the inequalities of wealth that make such a tragedy possible.

That our NHS is being stretched to breaking point is news to no one. Speaker after speaker rose to give their accounts of how the impact of cuts and reforms are being felt in their workplaces and communities. In particular, the growth of ‘wholly owned subsidiary companies’ and ‘special purpose vehicles’ were highlighted as means by which privatisation is taking place by the backdoor. These companies may be initially owned by the trusts but they allow for staff to be employed on worse terms and conditions than their colleagues employed directly by the NHS. This leads to cost-cutting, a two-tier system for workers, and paves the way for big business to take over swathes of the NHS by stealth.

An interesting debate followed about so called ‘public service mutuals’ (PSM). These are meant to be worker cooperative; a speaker rose to argue that they could give workers tangible democratic control over their day to day working lives. However, conference voted almost unanimously to oppose these mutual and relay a message to the cooperative movement they should not support these organisations within the NHS. The reasons given by delegates for opposing PSMs were as numerous: they can’t provide the same job security or pensions; they would find it harder to facilitate family friendly working patterns; and they could open the door to privatisation. Opposition to PSMs was also given on the grounds that we should support the principle of control of trusts by the community.

It is clear that the situation facing workers in the NHS, social care, and the wider public sector is growing increasingly difficult. However, union members are fighting back.

Delegates from Wigan spoke of their fight against management attempts to transfer workers from the NHS to arms-length companies. Unison, Unite and GMB workers at the Wrightington, Wigan and Leeds (WWL) NHS trust voted to take strike action to prevent 900 members of staff being transferred to a wholly owned subsidiary company. The trust’s aim is to put support staff on to worse contacts in order to cut costs. This is part of a wider attempt by the current government to make working class people pay for the economic crisis and to dismember the NHS with a view towards introducing a privatised, insurance-based system – this is something NHS workers refuse to accept. Happily the workers at the WWL trust won their dispute, the action they took led to the trust abandoning its plans, protecting their working conditions and the public who depend on them.

Branch delegates made their voices heard; members want support from the union’s leadership to help them take actions to preserve in-house provision. This means, among other things, logistical help to enable them take industrial action when there is support for this among members in a workplace.

Most disagreement and debate at conference concerned proposed changes to the unions rules and structures. The union leadership, the National Executive Committee, put forward a motion calling for a strategic review of to look at wide-ranging changes to how the union works. The alternative was a motion backed by South East region and a number of branches calling for specific re-allocation of funds to branches and a member led review (unfortunately this didn’t reach the conference floor due to lack of time). Plenty of speakers on both sides took part in the debate on the NEC motion. Those against raised two main concerns, that the motion was ambiguous about how should conduct the review itself, and that it could lead to branches having less control of their funds. The reference in the motion to the need to move away from a “federation of independent branches” may have added to these fears. Frustration was voiced by some speakers that branches wishing to take strike action weren’t receiving enough support from the union leadership and that branches having access to funds for industrial action is an important factor in negotiations with employer. In the end a card vote was called, and conference voted by 690,000 to 394,990 against the motion.

It was not the last time that the rank and file members would assert themselves at conference. A proposed rule change, backed by the NEC, that would have prevented members who also worked part-time at another branch holding officer posts was also defeated.

One of the most contentious motions related to a proposed change to the gender composition on the NEC seats, which produced a lively and useful debate. The proposal would have turned seats reserved for men on the NEC to general seats, whilst reserving the seats reserved for women. The proposers were looking to make sure the NEC better reflects the union as a whole, with its 78% female membership. One speaker also mentioned how having general seats would remove a barrier to members who did not identify as either a man or a woman. The motion was opposed by the Black members group who were concerned it could lead to black men being absent from the union leadership. They argued that black men face oppression and obstacles which are specific to them and that their voice could be diminished by turning the seat into a black general seat. Conference voted roughly 70% to 30% against the motion after having been convinced that it would be a retrograde step.

Political campaigning is a vital part of what a union does. The National Delegate Conference is an opportunity for members to help decide the union’s campaigning priorities for the coming year.

Aside from campaigning around public services and workers’ rights in the UK, Unison also seeks to support other unions across the globe and campaigns on human rights issues.

Conference passed a motion condemning Turkish president Recep Tayyip Erdogan’s brutal crackdown against journalists and the opposition; and the political sackings of tens of thousands of public sector workers. Unison calls on our government to condemn these measures and extends its solidarity to those such as the HDP who are trying to resist them.

Conference also passed a motion condemning the detention of Palestinian children by the IDF. As a union which include members who work with children, and as human beings, we are rightly appalled at the practices of Israeli security forces in relation to their treatment of Palestinian children. This includes draconian sentencing of children for offenses such as stone-throwing and the transportation of children from the West Bank to Israeli prisons in violation of international law.

In relation to the UK’s withdrawal from EU conference passed a motion calling for a “workers’ Brexit”. Although Unison campaigned to remain within the EU it now accepts that the withdrawal is going to happen and calls on Labour and the government to ensure that any costs of this are not borne by those at the bottom. The union rejects any future arrangement which damages workers’ rights (including the right of EU workers to remain) or would curtail the ability of a future Labour government to re-nationalise our energy, rail or water industries and put an end to marketised arrangements within these sectors. Recognising that the referendum result legitimised for some the expression of anti-immigrant sentiment, and that this subsequently led to an increase in hate crimes in the UK, Unison reaffirmed its commitment to campaign to combat all forms of racism and fight the ‘hostile environment’ policies of the current government.

Unison conference is an important opportunity for members to make shape the future of our union. Delegates come away from conference feeling invigorated, there’s great camaraderie and something of interest to everyone. Why not consider attending conference next year? If you would like Hampshire Unison to submit a motion to next year’s conference or would like to attend conference next year contact the branch at: unison@hants.gov.uk

A list of the different Unison conferences you can attend can be found here: https://www.unison.org.uk/events/?filter-0=28