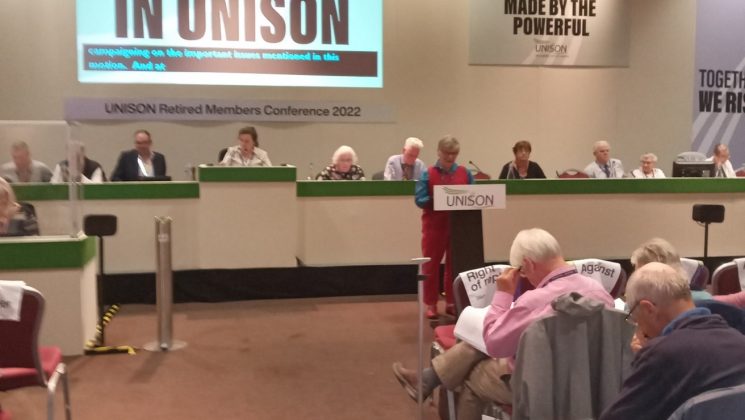 This year’s Conference was held in Telford, near Ironbridge, on 17th-18th October, so Joe Hannigan and Diana Barnes travelled there the previous day.

On the first day, there were various meetings for Black members, Women, LGBTQ+, and Disabled members, and talks, including gatherings for people from the Regions. Diana attended the Women’s meeting, where we elected our representatives to the Unison National Women’s Conference in February, complained that Unison’s support for the WASPI women whose pensions have been unfairly delayed was not helping much, and worried about the gender pay gap having an impact on women’s pensions.  We supported the women in Iran protesting about draconian rules, and promised to protect the NHS as unqualified people are being asked to do the work of GPs.

At our meeting of the S.E. Region, there was a general feeling that time had been wasted in between sessions during the day, and that the wall-to-wall Motions planned for Wednesday could have been started on the Tuesday, as it is quite usual for the time allowed for speeches to be cut as the day wears on. Our Chair promised to take this protest to the National Executive.

Diana attended a session on “There for you”, Unison’s charity/welfare organisation, which is indeed ‘There’ for retired members as much as for working members, but of course its limited funding means that not everyone can be helped – they welcome any income or fundraising events. Many of us were unaware of the work they do, and of the professional team of 10 people with knowledge of grants and benefits available, so this was useful.

Joe attended “Working across the generations on the cost of living”.

On the Wednesday, it was indeed a very intense day, and yes, the time allowed for speeches moving Motions was cut from 5 minutes to 3 minutes for the afternoon. Diana’s speech had to be assessed and re-written at lunchtime to make sure it would fit. We are an active group of people, passionate about protecting our pensions (the Triple Lock!), our TV Licences, free prescriptions, the NHS and our bus passes, and worried about social care, Heating v. Eating this winter, access to services for people not on the internet, and the increasingly cashless society. We wanted more support for our activities from our branches and Regions, and more acknowledgment of retired members in U magazine, which as we noted, ironically, is full of adverts for stairlifts, bathing aids and reclining chairs! Our own Motion, on Campaign Communication, asking to be kept better informed, was passed. (We mentioned that we are very grateful for the excellent communications from the National Pensioners’ Convention!)

Almost every Motion was passed, the exception being one that raised the possibility of paying in to something like a Pensioners’ Insurance Policy for help with future treatment: we felt that once we accepted the need for paying for operations, that would be the thin end of a very large wedge!

Wolverhampton was determined, in an amendment, that every time ‘elderly people’ cropped up, this should be changed to ‘older people’. Not everyone agreed, but it passed anyway. Images of two very bent old people with walking sticks on a road sign are not helpful to our public image!

Generally, it’s good to go to the Conference, meet other people and find out more about what’s going on: we enjoyed it, and came back with renewed enthusiasm for our campaigns!