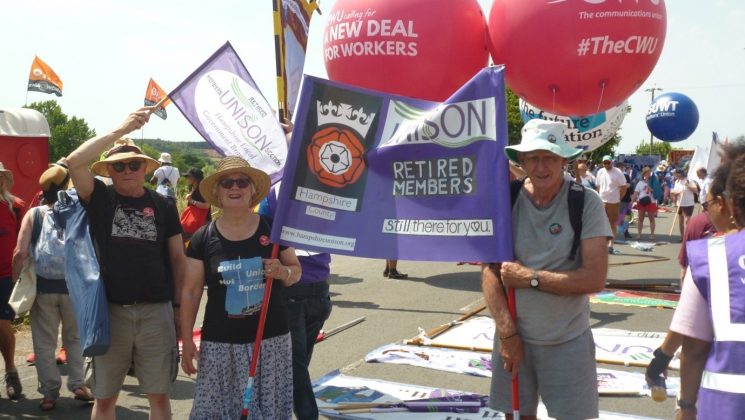 There has been an annual gathering to mark the story of the 6 Tolpuddle Martyrs, who started the first Trade Union, since 1930s. It began as a Sunday afternoon event with wreaths laid on the grave of James Hammett, followed by a procession of banners and speeches. Today, the annual event sees thousands of trade unionists from around the UK and the world descend on the small village of Tolpuddle in Dorset to celebrate the memory of the Tolpuddle Martyrs and the legacy they left behind. The Tolpuddle Martyrs’ Festival reflects the spirit of those prepared to stand up and be counted, and for those just learning about its history. It is a joyful celebration of solidarity:

On Sunday July 17th, Chair Chris O’Neill and committee member Diana Barnes from the Hampshire Unison Retired Members’ Section travelled to Tolpuddle. They were accompanied by Diana’s husband Clive, and Chris’s friend Andy as photographer. It was the first time in 3 years that it had been possible to hold the Festival, so there were a lot of people there on a lovely sunny day, and the number of political stalls (and food outlets) seemed to have increased since we were all there last in 2019. There had been events on all weekend, and many people were camping in 2 nearby fields. We had time to look around the stalls, and lined up with our banner, ready to set off shortly after 2.00.

There were 3 bands helping to keep us moving, and we matched through the pretty village on a shorter route than usual because of the heat. 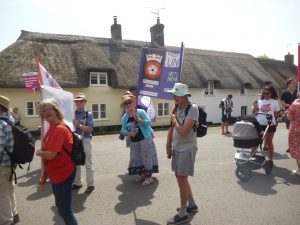 We turned around and walked back, and that was the best part- seeing all the other banners and marchers who had been behind us- there were hundreds. We were serenaded with suitable left-wing songs by the ‘Red Notes’, and arrived back at the Tolpuddle Martyrs Museum in plenty of time to put up our folding chairs in a shady spot and listen to 3 very good speakers: Nigel Costley, South West TUC Regional Secretary, Frances O’Grady, who is retiring as General Secretary of the TUC, and Angela Rayner- they were all inspiring.  A group of people started the ‘Oh, Jeremy Corbyn’ chant, but, although he was there, as he has been every year for a long time, he was too wise!

Diana and Clive had to leave as singer and left-wing activist Billy Bragg came on stage, but we were able to hear a bit of his set as we waited for the coach back to Southampton. His hair has now turned grey, and he was very amused to have been mistaken for Jeremy Corbyn at another event!  He had enjoyed hearing campers singing some of his old songs, but admitted that he had forgotten some of the words. It was good to hear him, still protesting…

It was a good day, and great to be there with so many like-minded people: a day or weekend that is recommended!  The Museum is, of course, open on many other occasions:  The Museum | Tolpuddle Martyrs and you can sit under the very tree where the 6 agricultural labourers sat and discussed their protest.