Report from Diana Barnes on the NPC Pensioner Poverty Webinar 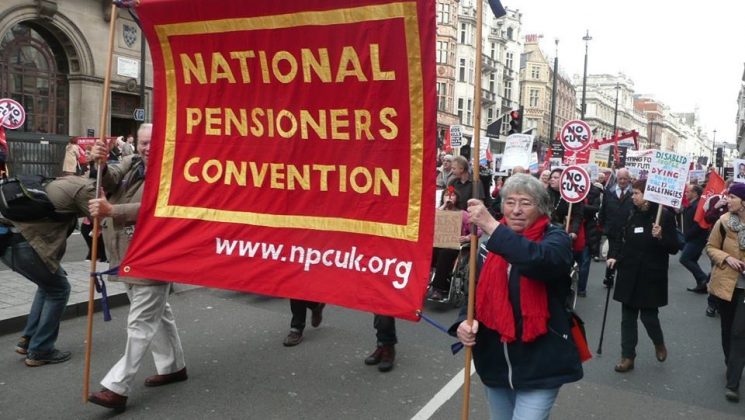 More than 2 million pensioners live in poverty now. 1/3 have to choose between eating and heating. 1.1 million more live in hardship: these are mostly 85+, and women are hit worse. Incomes are not keeping pace with rising prices, costs going up further in April esp. energy. Many older people live in poorly insulated homes. Winter Fuel payment used to cover 1/3 bills., now barely 1/8. Free bus passes may go. Crisis in health and social care. Pension Credit is sometimes no help when a small pension might push a person over qualifying rate. Broadband costs money, many older people not online and missing out. We need a dedicated Commissioner for Older People as in Wales and N.Ireland.

(Gillian Keegan, Minister of State for Care at the Department of Health and Social Care had not responded to Jan’s invitation to attend.)

Karin Smyth: 85% of care is now private. Dilnott Report not put into action. We must get it right soon, or it will be worse for the next generation. Local Authority funding cut by £8billion. Many commitments made, but not enacted.

Adult children should not have to leave work to become carers.

1 million people are missing out on Pension Credit. Find them! There should be legislation preventing scams, often targeting older people.

New housing should be planned for easier access. Labour policy “Home First”- keeping people in their own homes is not only better, but cheaper.

Loss of the earnings element in the Triple Lock will have an impact on the pensions of future retirees. State Pension = 70% of current living wage (outside London), plus Triple Lock- tacit admission that Pension is not enough for dignity and security.

Lord Prem Sikka:   thanks the House of Lords for their support of OP. Triple Lock Bill going thru’ Commons- Labour abstained (!) but the Lords rebelled!

State Pension is now only about 25% of average earnings. He thinks this should be not less than minimum wage- it’s about half that at the moment. Other countries do much better in paying their Old People- their voices count for more in many countries. Helping todays OP helps future retirees.

2.5 million women receive less than £100 per week.  April will see a real-time cut in SP as inflation rises. Need immediate rise of £500 and double winter fuel allowance! This is affordable: Govt was able to bail out the banks and wrote off Covid losses thru’ fraud etc. It’s not right that cancer can be treated on NHS but Dementia/Parkinsons comes under Social Care. No need to raise income tax, as threatened. Govt could tax unearned income- this is actually taxed at a lower rate at present.  Should Tax Capital Gains. Taxing dividends could raise £5 million, which would cover the Triple Lock. Now, for tax rates, the more you earn the less you pay proportionately, and Inheritance Tax is routinely avoided. Richer people can afford to pay accountants to avoid tax. HMRC admits that it loses millions in tax.

Social Care should be brought back into national ownership.

Lord Prem wrote a Paper about this, sent it to Keir Starmer, followed up, sent it again- still no response.

Many people were struggling before the pandemic, and it’s worse for them now. Some are reluctant to claim, and others are worse off if they don’t know how to claim. 2 million living in poverty, up 5% since 2011, highest ever since 2016. In the last 10 years, 40% spent at least 1 year below the poverty line.

1 in 20 are long-term poor, i.e. for 7-9 years. Some groups are more likely to be poor, and single people suffer alone. 20% of Black people who privately rent have fallen into poverty because of social benefit cuts.

Independent Age is pushing Pension Credit, as millions are missing out. Only 65% of those eligible claim, and there is £1.5- £2 billion in the pot. Pension Credit is the gateway to other benefits, and that can lift people out of poverty. The Govt. doesn’t know who is not claiming but eligible. Could save £4 billion from preventing rescue or hospital stay.

Other comments from the Panel.