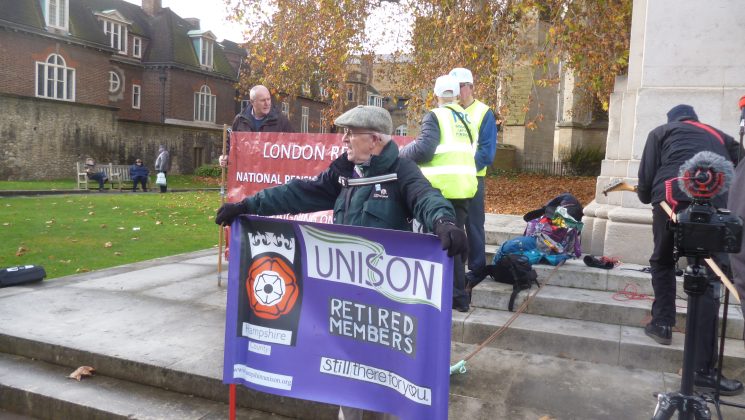 The above protest took place at Old Palace Yard, Westminster, later moving to Downing Street, where a letter was handed in for the Prime Minister.

The event was organised by the London Region of the National Pensioners Convention together with Fuel Poverty Action to protest at the growing number of deaths amongst pensioners which are cold-related and occur every winter. 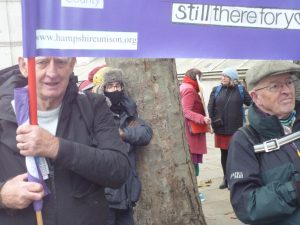 On a cold, crisp morning, Joe Hannigan and myself together with our banner, joined proceedings representing Hampshire Unison Retired Members Section. Barry Todman, NPC, the organiser, stated that pensioners were already dying from cold-related illnesses, a situation likely to be aggravated in the future by increases in inflation and energy price increases (predicted to be 30%), leaving some pensioners with a choice between being warm or having sufficient to eat. There was a clear need for warm, properly insulated housing with an adequate income to sustain it. He added that this was a basic requirement for a decent society to achieve.

Other speakers were Sue Ferns, President of the TUC, Ruth London from Fuel Poverty Action, and Lord Prem Sikka, an active campaigner for the welfare of pensioners in the House of Lords and a distinguished academic (see our article ‘TUC meeting on state pension” on the Branch site dated 7 September 2020). Lord Sikka was scornful of the government which in one of the wealthiest countries in the world has pensioners who go cold and hungry. He explained why interference with the triple lock protection on the state pension was a disgrace and would affect even those currently working on how much pension they would eventually receive. 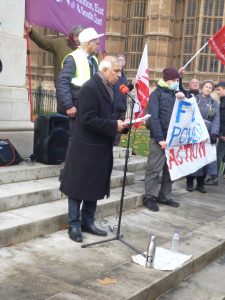 Many trade unions were represented at the gathering and there was a surprisingly large media presence. Joe was approached by a London radio station for an interview, which he agreed to do. I thought he gave an excellent account of our views.

Later when the demonstration made its way to Downing Street we were passed by the Prime Minister’s noisy convoy of cars heading for Parliament. We hope on his return home, that he read our letter about excessive winter deaths. He is, after all, someone who can initiate action to bring this shameful situation to an end.