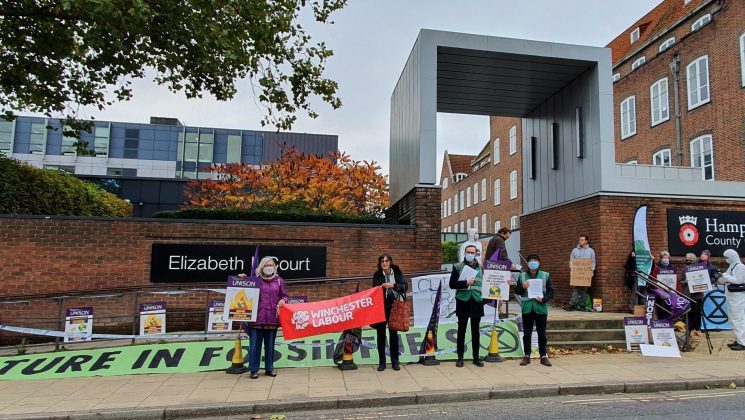 Members of Hampshire County and Winchester District UNISON branches came together with regional staff and a number of local organisations this week to highlight their climate concerns. UNISON’s campaign calls on the Hampshire Local Government Pension Scheme to divest from environmentally destructive industries and protestors gathered outside the county council’s headquarters whilst participating employers met indoors. The pension scheme currently invests an estimated £136,056,249 in fossil fuels – despite Hampshire County Council declaring a climate emergency in 2019. With thousands of UNISON members also participants of the pension scheme our branches felt it was their responsibility to highlight the problems.

Branch Secretary of Winchester UNISON, Simon Wolfenden, was delighted at the number of people who came to support the demonstration, saying that ‘As a branch we feel very strongly that we must work with other local groups who can help us persuade the pensions board to divest. So many of our members pay into this scheme and they have been appalled to find out how their money is being invested’. UNISON activists were joined by members of the Winchester Labour Party, environmental group Winchester Action on Climate Change, Winchester Extinction Rebellion, the University of Winchester’s Sustainability Society, and its local UCU branch. 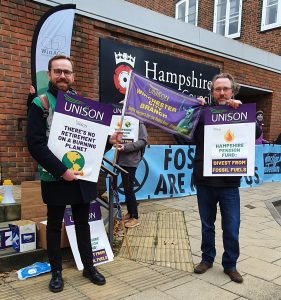 Regional Organiser Paddy Emond spoke to several of the scheme’s participating employers as they made their way into the building. He said that ‘This has been a really positive event and shows that our campaign is going from strength to strength. We’ve had some good conversations today and I’m confident that our message will get through to the board. Hampshire must divest now – there’s no retirement on a dying planet.’

Members of Winchester Extinction Rebellion declared the area a ‘Climate Crime Scene’ and highlighted the fact that neighbouring counties have already started to divest from fossil fuels. Their activists made quite an impression on council staff, many of whom were angry and upset when told about the scheme’s decisions. 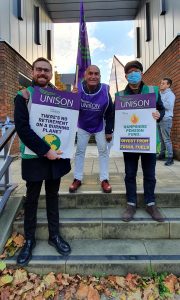 In addition to voicing their environmental concerns, demonstrators also called on the fund to address it’s democratic deficit.

UNISON’s Neil Duncan-Jordan said that ‘There are a number of issues we wish to raise with the board, not least the fact that members who move away from Hampshire no longer have the right to make representations – no matter how many years they have paid in for. We estimate that some 20,000 people have been disenfranchised in this way, and that clearly cannot be right’.

The divestment campaign is gathering momentum quickly, but it’s important that as many members as possible make their concerns known to the board; after all, it’s your money! For more information about our aims, or to join us at a future event, please email P.Young@unison.co.uk