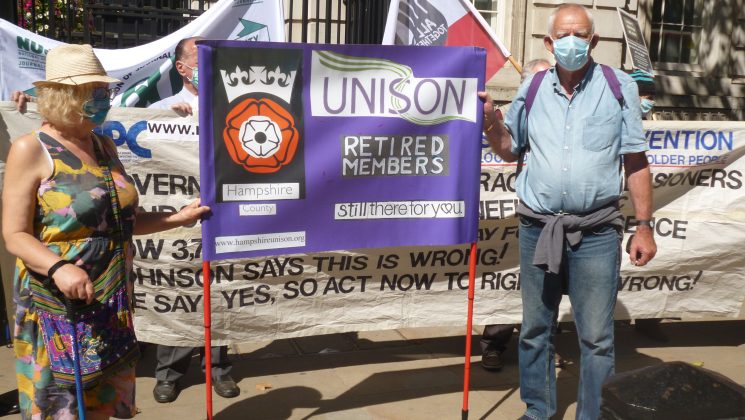 Your Retired Members Management Committee has been active in opposing the BBC decision to withdraw free TV licences from the majority of pensioners aged 75 plus. We have engaged with the media, written to elected representatives, and taken part in street demonstrations.

I think our attitude is best displayed in our letter published in the Hampshire Chronicle on 30 July this year (see here) sent in response to a pensioner complaining that the cost of the licence would be for her the equivalent of one week’s state pension: money she could not afford.

Opposition to this mean-spirited action has been led primarily by the National Pensioners Convention, an organisation representing one and a half million members, to which we are affiliated.

On 30 July they organised a series of demonstrations around the country. I attended the one in Downing Street, London (see photos). In addition, letters of protest have been sent to local MPs, the Chancellor and the Prime Minister.

Sadly, for the present, this is a battle lost. However, your committee believe an injustice has been perpetrated on a group of their fellow pensioners and intend to continue working to have this decision reversed.

If you share our dismay at the current situation on TV licences, you might consider writing a letter to your Member of Parliament asking if he or she supports the BBC decision and giving them the benefit of your views.

Report from the TUC meeting on the state pension
Retied Members Section – Good News on the State Pension?