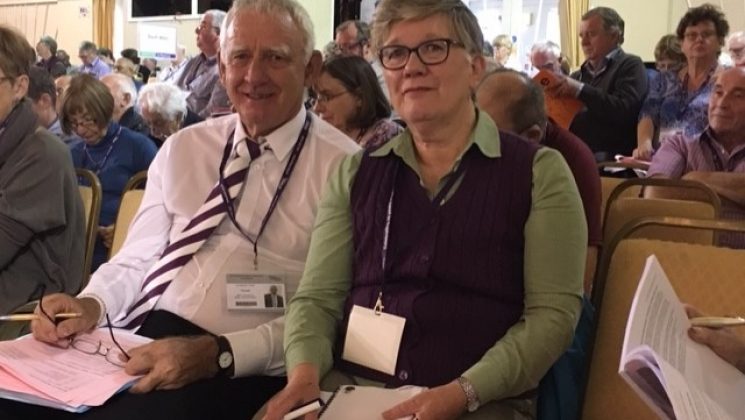 Southport is located on the north-west coast of England, not far from Liverpool. It is a lively holiday resort with many shops and restaurants and noticeably friendly residents.

There was a motion on bus passes on the agenda to which we had added an amendment. As you may know, the leader of Hampshire County Council has over several years worked to try to dilute the value of the bus pass, suggesting charges for both its issue and every journey made. Addressing Conference, Chris told them of our committee’s efforts to oppose these activities, adding that it was our view that any similar attacks on the bus pass should be challenged at a national level because any success one local authority had in weakening bus pass rights would no doubt be followed by other authorities. The motion was passed with a unanimous vote.

The BBC decision to withdraw free TV licences from the majority of pensioners aged 75 plus was discussed. It was suggested that Delegates contact their branch Labour Link officer to request it be included in the Labour Manifesto that the BBC’s decision on pensioners’ TV rights be set aside. Pat Turner, one of our committee, has attended demonstrations about the TV licence issue, both in London and Southampton.

We’ve passed this request to the branch Labour Link officer, Leanne Jones, and perhaps optimistically additionally seek a policy statement that the savage onslaught against pensioners’ rights which has been ongoing for ten years be halted. Leanne has replied, confirming that she will work to support our request.

Our delegates attended and voted at all conference sessions, but not all was work for our delegates; they attended a social evening organised by our hosts, North-West Region. Not content to dance the night away, Diana worked hard to encourage many other delegates to join in the dancing, which largely she succeeded in doing.