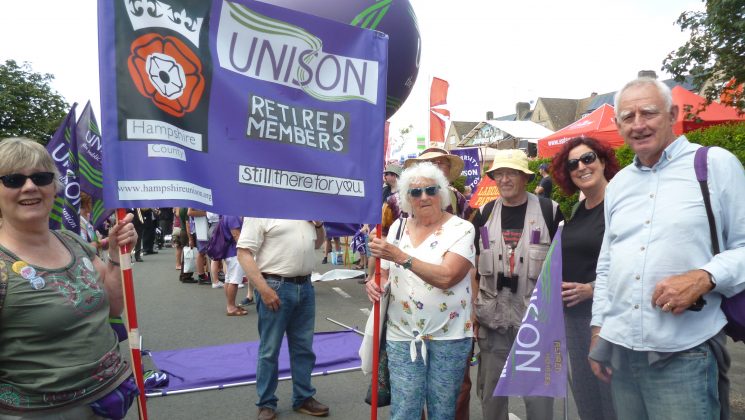 Exciting, amusing, stimulating, entertaining, intellectually challenging, all this is one day at the Tolpuddle Festival.  Our thanks to Patrick Young, Area Organiser South East/West team, who arranged the coach to the Festival for Unison members and friends, picking up at Winchester and Southampton.

During the morning we visited the exhibition area manned by people representing various political views, campaigns and, of course, trade unions.  All the participants were keen to tell us all about their organisations or campaigns and of course willing to enter into good humoured debate if you don’t agree with them.  In addition, there is the opportunity to listen to gifted speakers or hear the performances of an eclectic, talented selection of musicians from around the world. 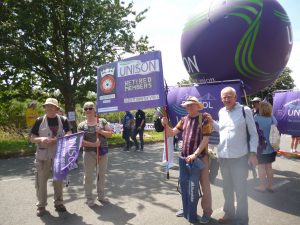 For us, the highlight of the day was when so many of the organisations present paraded their banners through the village.  We were delighted to be amongst them with our new banner, a fantastic occasion for its first public display.

Parade over, in glorious sunshine, we gathered to listen to Jeremy Corbyn.  He spoke on many subjects, not least his Party’s plans if they won the next General Election, amongst which were a ten pound per hour National Minimum Wage regardless of age.  Inspiringly, he said that all children should be given an equal opportunity to reach their full potential; this involved free nursery care from two to four years, hot meals for all children in school, and the withdrawal of SATs testing.  Additionally, the formation of a national education service, and a determination that children’s development opportunities should be equal and not related to their parents’ wealth.  Jeremy said such policies were an investment in the future.  Who could argue?

Overall, a day to remember and indeed honour, the memory of those six martyrs to whose struggle working people even today owe so much.