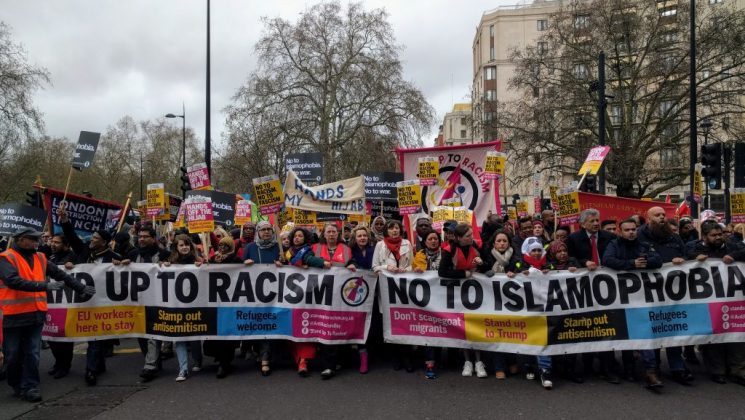 As your UNISON Hampshire Labour link Officer I attended the Regional Labour Link Forum on the 8th March.  Two motions were passed, Cuts in Local Government and Modern Slavery, these will now go forward to the National Labour link Forum for further discussion. If you would like the full wording of the motions please let me know.

On Saturday 16th March, along with around 25,000 people I took part in the UN anti racism march. The event, organised by Stand Up to Racism and Love Music Hate Racism, demonstrated values of respect and equality for all, for multiculturalism, strong cohesive communities and peace. It demonstrated solidarity in action against the politics of hate, against bigotry, racism and discrimination of all kinds, and against the politics of fascism. The event was supported by the TUC and UNISON.  You can access the Stand Up To Racism press release here a picture of the day is below.

I continue to attend Hampshire UCAS committee meetings and was a day visitor at the UCAS Women’s conference last month, this was a wonderful opportunity to meet women within UCAS who are willing to speak out for change and equality for all, many motions were passed to be taken forward, again if you are interested I can provide details of these.

There was a Winchester and Chandler’s Ford Constituency Labour Party student recruitment event on Thursday 28th March at the University of Winchester.  We gave out  Labour Party branded cards with details of how to register to vote and suggested that students may want to think about voting for the Labour Party.  There was limited interest in students wanting to talk about politics, but many were very interested about getting signed up to vote.