Intrepid bus traveller has a message for Hampshire 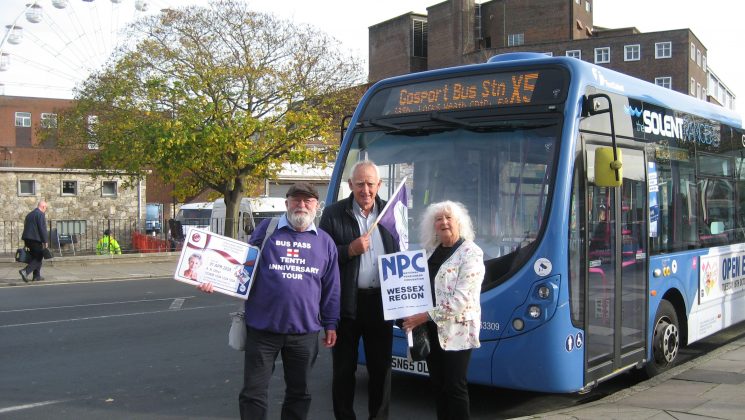 To celebrate the tenth anniversary of the England-wide bus pass for pensioners and to raise money for charity, Richard Worrall, seventy-three years, a councilor with Walsall Metropolitan Borough and committee member of the National Pensioners Convention has undertaken a sixteen-day bus trek around England.

Heading from his home town, he travelled north towards the Scottish border, down the east coast to Kent and along the south coast, arriving this week in Southampton, where he was met by Pat Turner, Chair, National Pensioners’ Convention, Wessex Region, and Chris O’Neill, Vice Chair of Hampshire Unison Retired Members.

When told of the ongoing efforts of Hampshire County Council to charge for bus passes and every journey made, Richard stated that he knew of no other local authority in England with such intentions, adding that in his own West Midlands area pensioners enjoyed free use not only of buses but in addition trams and trains in the authority area.  Richard added ‘I am most disappointed that not for the first time Hampshire County Council has ambitions to introduce fares to the County’s older and disabled bus pass users.  I urge all people in the county to oppose the loss of this lifeline for the many thousands of pass holders in the council’s area.’

Leaving Southampton en route for Lymington and Bournemouth, by the end of the week Richard intends to reach Lands End and then home via Barnstaple and Bristol.

Academic analysis of the social/economic value of the bus pass scheme shows a 3:1 benefit/cost ratio to the nation.